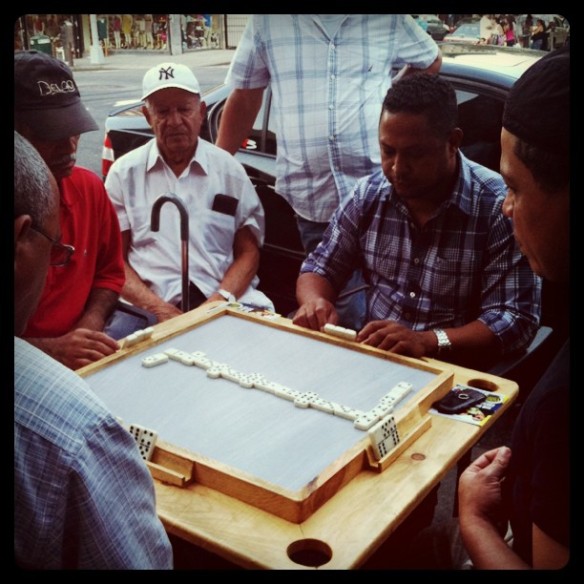 If baseball is Dominican’s favorite sport then dominoes is our favorite pastime. In the DR everybody, from the youngest to the oldest, male and female alike, spends countless hours playing dominoes. I like to joke that kids here in the U.S. grow up with an X-Box and kids in DR have a box of dominoes. It is that ingrained in the culture, so it is only natural that the love of the game has continued on American shores. Some of my earliest memories are of my mom and dad playing dominoes with friends and family. Before I could even hold all the fichas (domino pieces) in my hand, I was joining along.

To even use the word “playing” might be considered by some die-hard aficionados as sacrilegious because to them dominoes is not a game – it is more like a science. Dominoes is Dominican Chess. That is how serious some folks take it. To watch a game of good players is to observe a highly sophisticated and synchronized contest of wills and intelligence. Never mind the animated banter, insults and biting humor, these people are really in deep concentration with a laser like focus on the game. The barbs and talk is more of a ruse than anything, another way to keep your opponent off-track. Great players think several plays ahead. They know what each player has in their hands without looking.

Another thing that some folks may not realize is that the game of dominoes, at its purest, is really about team work. Meaning that it is two teams made up of two people waging mental warfare as a unit. Within the team, both players are actually sending subtle signals with every single domino that is played. What takes place is a tightly orchestrated and skilled dance that may not be obvious to the uninitiated.

I thought I knew how to get down until I took trip a few years ago to my mother’s hometown of Esperanza, in the Cibao region of DR, and tried to play with some of the domino players there.

On the very first day we touched down on Dominican soil I received the rude awakening that I was no match for these older much more capable players. As soon as the obligatory, wonderful welcome feast ended we sat down to play some dominoes. My mom who loves to play had a table made just for playing dominos in the backyard. It has 4 fixtures for the player’s fichas as well as 4 cup holders for each player’s drinks, which usually meant Brugal rum and Coke. My mom’s brother, Santiago, who passed away earlier this year, was in his mid 70’s, teamed up with his son, Miguel, to play against me and my cousin Uri. Uri, by the way, plays in a Dominoes league.

I’m not really a rum drinker. I prefer beer and as of late I kind of gotten into drinking wine but since my beloved Tió Santiago was drinking Brugal and Coke, I decided to follow his lead. I figured that if the old man gets hosed he would be easier to beat. I could not have been more wrong. On this fateful first day in Esperanza I got ate up by 3 three things. First, it was the mosquitoes in my mom’s backyard that couldn’t get enough of my sweet Americanized blood. The tracks on my arms and legs from the mosquito bites left me looking like an Edgecombe Avenue junkie. Secondly, I was throwing back the Brugal like it was water. The more I lost, the more I drank until I was thoroughly trashed and thirdly it was Tió Santiago and el primo. It was like they were in my mind. After I had enough of this bloodletting, I just got up and went to my air-conditioned bedroom and fell asleep. It was about 5 o’clock in the afternoon. Que humo! My uncles and cousins must have been thinking what a new jack.

I woke up around 9 o’clock in the evening with my head spinning, my stomach growling and my ego bruised from the bashing I had received just a few hours earlier. The first 2 symptoms were easy to resolve. My mom made some fried salchichon (Dominican salami) and tostones (fried and smashed green plantains) to cure the hunger and I washed down my favorite meal with an ice cold Presidente to deal with the hangover. According to popular Dominican wisdom, the best way to get over a resaca (hangover) is to keep drinking. So I did. Bottoms up!

The bitter sting of defeat, on the other hand, could not be so easily placated. I couldn’t get over getting whooped like I did in dominoes. I tried to tell myself that maybe it was the Brugal. There was no way I could be that bad. I play dominoes on a weekly basis in my mom’s crib back in the Heights. I swore, tomorrow I would get my revenge. Not! The next day it was pretty much the same story.

So the next time you see some a group of people playing dominoes on the block, realize that there is much more to the game than what meets the eye.

This post is dedicated to my Tió Santiago Moronta who passed away this year after a lifetime of whooping ass in dominoes. May you rest in peace!